Hulu has all the right moves.

The streaming ecosystem has one big kahuna with Netflix, no surprise, but there are other players coming up with a stream (no pun intended) of good moves. One of them is definitely Hulu. I talked about Hulu over a year ago in one of my first posts but so much is happening lately that it deserves a new update.

From the start of its own originals with The Handmaid’s Tale – and nailing it with a product that addresses quality content, effective marketing efforts (and the intersection with the #MeToo movement), and distribution strategy (weekly episode releases) – to the announcement of the download option available sometime in 2018, the introduction of a Live TV Guide and finally the announcement of having reached 20 MM subscribers, Hulu is building a solid fan base in the United States and it is not unlikely it might go internationally very soon (see Randy Freer’s, CEO of Hulu, remarks at CES this year here). The Live Tv offering in particular, which Hulu started in 2017, poses the company as a strong competitor for other vMVPD – virtual Multichannel Video Programming Distributor – which are not going to sit and watch this unfold but are also coming up with skinny bundle offerings on their own to compete in quantity/quality and price.

The partnerships: where Hulu in my opinion really nailed it is on the partnerships side. The one with Spotify in particular is relevant, useful and, more importantly, convenient to the customer. $12.99 for both Spotify premium (no ads) and limited ads Hulu? Sign me up! What’s 3 more dollars if you were already a Spotify subscriber? And to sweeten the deal, for the first 3 months the add-on for Hulu is only $0.99. Other breakthrough partnerships are the one with Disney – an owner of Hulu -, one with Dreamworks, the one with NHL for live sports – huge deal for sport fans – and probably more in progress in the area of VR.  There’s even a partnership with Brightline that allows the viewer to buy the tickets for a movie when the viewer watches the trailer (the partnership will extend to enable retail and quick service restaurant purchases at some point in the near future).  Clearly a strong multidirectional effort aimed at chasing different type of viewership. A good partnerships ecosystem addresses variables that are extremely important for both end customers (price point, product affinity) and the partners involved (amplifying marketing efforts on both sides, for example) with the ultimate goal of increasing subscription numbers on all sides.  If a partnership responds yes to all these questions / variables, it is one to pursue – see below chart. 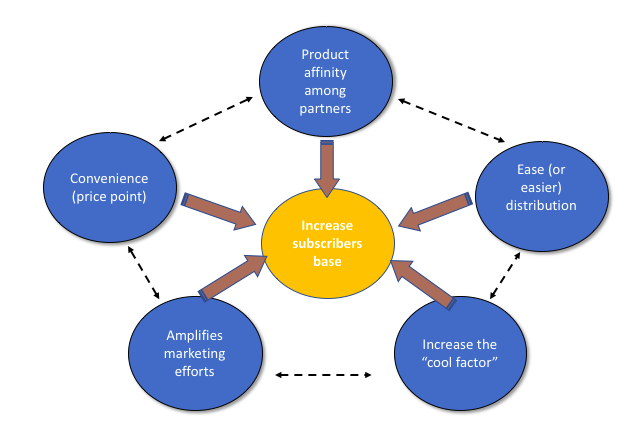 The content: Hulu is focused on television shows which means the core content was and is always going to be reruns of old tv shows. By focusing on these content choices Hulu was able to direct all the content acquisition efforts towards things that Netflix and other streaming players were ignoring: shows that were prematurely cancelled (for example, My So Called Life – critically acclaimed in the 90s), shows that have been unfairly cancelled (The Mindy Project – picked up successfully), and crowd pleasers (Seinfeld – an exclusive that cost Hulu $160 MM back in 2015, see this article from Variety).

The choice of launching originals has come later and with a much smaller and more focused budget than Netflix. However, it was only with the release of The Handmaid’s Tale in 2017 that Hulu broke a major ceiling in terms of widely acclaimed content from both critics and audience (and awards, which immediately followed).

Last, in April 2017 Hulu launched the live TV offering – resulting a year later in 800k subscribers on a total of 20 MM memberships. Not too shabby.

The strategic positioning: Those who consider Hulu strictly a Netflix competitor are probably living under a rock. Hulu has focused from the start on TV products only, has an ad-supported version with a reduced price, and hasn’t gone internationally. It’s still a private company, also. Certainly there are convergences here and there between the two (both are doing originals) but on a very different scale, as Netflix is spending $8 billion this year ONLY for new content and won’t unlikely offer an ad supported version (why would they, if they have 125 MM subscribers already used to a no-ad format?). Differentiating has been key in the success of Hulu. There’s no point in fighting a war you can’t win but there’s a lot of sense in being the one who chooses a different playground.

Finally, the content distribution moves have been the right ones too: re-introducing weekly releases similar to the linear TV model is a choice that makes sense, in an era where content stands on its own and is able to hook viewers enough that they might be ok waiting a week to know what happens next – exactly like it used to be with linear TV. Also, if you can’t compete with the binge watching habits – viewers are always going to watch faster than it takes to make an episode or a series – , so why not switching the strategy completely?

The marketing mix: A huge paid marketing effort usually is not enough when it comes to entertainment products. Even some Star Wars movies underperformed at the box office in spite of a gigantic marketing push they could rely on, and that includes the latest “Solo” release. The reason is that entertainment content is truly the only one that needs a balanced and rock-solid injection of marketing efforts on all sides, including free and earned. A lead actor with a large Instagram following is not going to ensure automatic success unless that is paired with promotions, advertising and the good old word of mouth (and all of that means nothing if the above-mentioned lead actor tweets something racist… right, Roseanne?). The democracy of all this is that word of mouth, ultimately, is a result of how much viewers like/relate to the content and cannot be forced by media or tech corporations. The Handmaid’s Tale is the perfect example, and this is why I consider Hulu’s marketing mix one of the best in the business: the series gained huge success not just because of the paid marketing (see this great interview to the showrunner Bruce Miller on how the series ended up intersecting with the #MeToo movement and resonating to an even wider audience, while promoting women’s causes: genius) but also because people loved the show and triggered a strong word of mouth process that eventually helped Hulu increase its subscription base.

Hulu’s CEO Randy Freer explained in this interview to CNBC that Hulu’s subscription increased exponentially in the last 3 quarters and especially in April (he noted that active subscribers spent about 100 hours with the service that month), and a lot of it is due to the critics and viewers’ success of The Handmaid’s Tale which is one of Hulu’s first originals – let’s not forget that.

With such a great Q417 and an even better Q1 2018 we will probably see very soon the first steps for Hulu’s international expansion. Stay tuned (again, no pun intended).